Whether it is a small motorcycle, scooter, or a powerful bugger like Harley Davidson, the battery is their heart. It powers the electrical components of your bike that allow you to ride safely. Batteries have taken giant leaps over time and are available in numerous shapes and sizes to cater to different motorbikes. When you look for the best motorcycle battery, it should essentially give enough power to meet your bike’s necessities, as found in Yuasa YTZ10S, our top choice for the purpose. 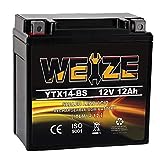 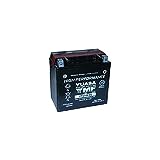 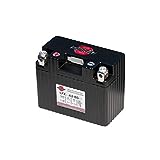 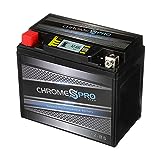 The components that make up a good motorcycle battery include terminals, ports and connectors, construction material, vibration resistance quality, sales & service support, warranty period on the defect, battery life expectancy, price point, etc. We have considered each of them and made our top list above. While doing research, we’ve found a good number of alternative products for each type of battery. If you don’t get one available, go for the alternative one without hesitation because they are more or less similar.

How much is the best motorcycle battery? We divide prices into two ranges-

Under $100: Most motorcycle batteries at this range will last up to 2 years, while a few have a life expectancy of a year. However, some are highly reliable, while others die after just two weeks in service.

$100 and up: For high-quality units like lithium, you should be ready to pay $100+. Anything less than this won’t be a good buy always, given that 8Ah lead-acid costs around the same. However, you can expect every available and required feature from these batteries with a life expectancy of 2 to 4 years.

A battery is a device that converts chemical energy into electrical energy using the cells. A single cell consists of plates or electrodes submerged in the electrolyte solution.

Electrodes have positive and negative charges and keep the charged particles suspended in the ions, which always flow from the negative terminal to the positive terminal through each electrode during the discharging process.

So, when these charges move from the negative end to the positive terminal, they produce direct current (DC) output.

AGM batteries can provide bigger bursts of amps when required, so they’re better suited for powerful motorcycles. AGM cells are made from lead-calcium alloy plates instead of pure lead plates like GEL cells.

Although both types of batteries contain at least 50 percent acid by weight, the different composition leads to significant differences between them. For one thing, gel cells are about 50 percent heavier than AGM batteries.

Both batteries contain a part known as the “electrolyte stabilizer,” which makes them capable of withstanding high temperatures without boiling out, where GELs are a bit ahead. In contrast, AGM batteries are several steps ahead at working in cold temperatures. Last but not least, you can mount AGM batteries in any position without affecting performance, and they can reduce the overall weight of your bike.

When comparing AGM vs. Lithium batteries, one of the main differences between them is the electrolyte used in these two rechargeables. The electrolyte is the material contained in a battery cell that allows electrons (negative charge) to pass from one electrode to another. They generate electricity in a process called oxidation-reduction.

In an AGM battery, the acidic electrolyte is just water and salt-based additives that contain potassium hydroxide (KOH). In contrast, lithium batteries use non-aqueous lithium-based electrolytes such as nickel or manganese dioxide (LiMn2O4), acting as the host material for cations Li+.

AGM batteries are most reliable for motorcycles due to sturdy construction, lower self-discharge rates, capacity to function well in lower temperatures, less lead sulfate crystal buildup, and the average risk of failure at deep cycling. But they can be easily damaged by improper charging.

On the other hand, Li-ion batteries are the safest to date among all batteries, thanks to inorganic phosphates. They’re the most fire-resistant too, and of course rechargeable. Discharge remains, as claimed actually, consistent unless full-empty. But as long as they are not getting older (they are new in the market, you know), it’s tough to certify this. However, they’re expensive.

There are several battery brands that motorcycle enthusiasts can choose from. Sometimes, it may be daunting to figure out what motorcycle batteries you should use for your motorcycle.

Battery Type: It’s essential to choose the right type of battery for your bike. Remember, a gel battery can’t run a motorcycle designed for wet batteries, or vice versa.

Cold Cranking Amps: CCA is the number of amperes at 0 degrees Fahrenheit a battery can produce after being discharged by leaving it at rest for eight hours AND until its voltage falls below 7.2 V.

Reserve Capacity: The reserve capacity (RC) is measured by how long a motorcycle battery will maintain its voltage above a preset level at 77 degrees Fahrenheit after being fully charged.

Cost: Price: If your budget allows, go with a lithium-Ion battery because they have higher CCA and RC, are lighter than lead-acid batteries and can last longer.

12 Volt Batteries – use two 6V or 8V cells wired together, thus creating a 12V (or 16V) electrical system – the most common battery used in motorcycles worldwide.

9 Volt Batteries – systems are most popular on vintage cruisers.

6 Volt Batteries – have an Ah rating composed of three 2V cells wired in series; a standard 6V battery usually has 18Ah while an extra-large one could go up as high as 60Ah.

How Long Do Motorcycle Batteries Last?

How long motorcycle batteries last depends on the brand, model and the type of bike. It also depends on how often you use your motorcycle and the way you maintain it. Most experts say that a good quality battery will last about five years maximum. But it may even come down to only a few months!

You should follow these tips to prolong the life of your motorcycle battery:

Charge the Battery Regularly – You shouldn’t leave your motorcycle battery dead. Remember to charge it as soon as you notice that its voltage level has dropped below 12.4V.

Charge Your Battery Well – To avoid motorcycle battery overcharge, make sure that the charging light on your regulator doesn’t go out before the battery is full.

Purchase a Good Battery – When making a battery replacement, compare different brands before deciding which battery is right for you.

Test the Charging System – Ensure that your charging system works properly by trying another good battery on your bike. Use a motorcycle battery tester to observe whether or not there’s current flowing from the alternator into your battery.

Does Motorcycle Riding Charge the Battery?

Some batteries are made to be trickle-charged, and others are not. The motorcycle battery is just like the car battery. It’s a device that stores and generates electricity. So yes, the motorcycle alternator will charge the battery while riding. But it’s not as simple as just mounting a battery and turning on the ignition.

Do Motorcycles Run with Dead Battery?

Nowadays, almost all motorcycles come equipped with an electric start system. Some of them use a kick starter as a backup if the battery runs flat or can’t start the engine. Therefore, you might think that running when the battery is dead will not be a big deal.

Motorcycle engines need the energy to run, and if there isn’t any, they won’t run either. You should never ride your motorcycle with a dead battery.

Can You Charge a Dead Motorcycle Battery?

The simple answer is yes. But before you start charging, you should understand why the battery died in the first place.

The two likely events are either total discharge or freezing temperatures. When a battery is discharged too low for an extended period, a chemical buildup forms on the battery’s plates that prevent normal charging.

When the temperature drops below freezing (32 degrees F), battery water freezes, expanding to break the cells inside the battery apart.

In the end, you should remember that a battery is one of the essential parts of your bike. When it dies, everything comes to a halt. That’s why it’s so vital to make sure you choose the right battery for your motorcycle and maintain its health as much as possible. That way, you’ll enjoy riding forever!