Harley bikes produce a pleasing sound from their stock exhaust system. But, during combustion, the released gases may create a disturbing muffled noise when being pumped out. Many riders, therefore, opt for slip-on mufflers to make the sound quiet but attractive. They’re easy to install and affordable, but the question remains- which is the best one to buy?

So many slip-on models are available out there, and Harley itself has a bulk of motorcycles. Choosing the most compatible and slip-on muffler for your Harley can be challenging, thus. Yet, we studied focusing on the Touring models and made a list of the best sounding slip on mufflers for Harley Touring.

Best Sounding Slip On Mufflers for Harley Touring (All Models) 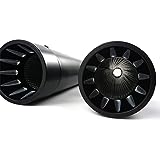 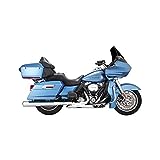 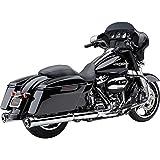 Mechanism of Exhaust and Mufflers

Exhaust and muffler manufacturers base their construction on three fundamental principles: sound absorption, heat absorption, and interior size. The role of these components is to get rid of the unwanted sound waves created during the combustion process. The sound of a Harley Davidson bike causes disturbance to the surrounding people.

To avoid discomfort, you must reduce these powerful noise waves to acceptable level limits. So industries came up with good designs for motorcycle mufflers.

They are packed with metal wool, glass wool, cotton fibers, or polyester fiberglass insulation which absorbs sound waves. In addition, these muffles are made of high-level materials that ensure they are of high quality. This results in less noise pollution.

What is a Slip-on Muffler? Why Use it

Just like the name implies, a slip-on muffler is an exhaust that you can install on the bike without the need to modify or replace the stock components. A slip-on exhaust system consists of a high flow muffler and exhaust pipe that runs from the cylinder head to an outlet tip at the end.

They’re especially ideal for low-performance bikes as they are easy and inexpensive to install. This makes them a favorite among amateur racers who only require minor improvements in their motorcycle sound.

The slip-on muffler is an excellent solution for adding some extra blip to the exhaust of your touring motorcycle. They deliver a rich, commanding sound without losing power and can be installed in a couple of hours. They are suitable for Sportsters as well as Dyna Glides that need more but subtle power.

The Harley Slip-On Mufflers are crafted from stainless steel and feature an attractive, durable finish which makes them highly resistant to rust or corrosion. They come as a complete kit that includes all the necessary components for installation.

How Does a Slip-On Muffler Make a Bike Louder?

A motorcycle’s power characteristics are given by the unified torque and power graphs of engine performance. The exhaust system affects how both these quantities behave.

The power produced in an internal combustion engine relies on the air-fuel mixture combusting properly inside the cylinder. So proper exhaust design is vital to maintaining good flow characteristics through a working gas cycle.

Does a Slip-On Exhaust Increase Horsepower?

A slip-on exhaust doesn’t give you a huge power gain, but it does do two things for you. It takes the pressure off the motor and allows it to rev faster. This allows more air into the engine than would be possible with a standard OEM exhaust.

Your bike will produce more horsepower because there is more oxygen getting to the cylinders. It also increases torque, especially at low RPMs, where most riders spend most of their time.

Although there is no huge power gain, many riders feel that the additional power is worth spending.

Consider These Before Buying an H-D Touring Slip-on Muffler

When choosing a Slip-on Muffler, consider the following factors:

This comes in different decibels (dB). The more the dB, the quieter your engine is since it mutes other loud noises.

Measured in inches, this tells you how much space and capacity is left from exhaust gases inside your muffler.

The lighter the muffler is, the better your acceleration and agility will become. Steel-made slip-ons are heavier, while fiberglass, graphite, or titanium are lighter.

You’ve got to match the muffler to your bike and engine. Choose a slip-on muffler design with the best finish from all types as it produces minimal interference with other pieces.

The Legality of High-Sounding Muffler

Muffler’s noise limiting requirements are established to reduce unpleasant noises from the exhaust system. Indeed, a motorcycle engine isn’t as quiet as you might think.

Does a Slip-on Muffler Void Warranty?

It is not that simple because it may depend on who you are talking to and their understanding of the situation. But generally speaking, the short answer is no. But there are some situations where it could be an issue depending on your bike and the manufacturer.

I’ve read and heard many stories of big dealerships refusing to fix an exhaust system because they did not install it. Smaller shops will usually cover the costs of repairs in that scenario.

Installation – How to Tune a Harley with Slip Ons?

First of all, you have to read the user manual and instructions carefully. Buy genuine slip-on compatible with your Harley Davidson motorcycle.

Gather all the tools you require for the installation process. You need screwdrivers and a ratchet wrench. If possible, use an air impact wrench to help you save time in tightening up bolts on mufflers.

Loosen up bolts on muffler pipes and remove the original exhaust assembly from your motorcycle.

Install new slip-on muffler in place of the stock mufflers. Tighten up all screws of exhaust pipes using a ratchet or socket wrench. Make sure you don’t exceed the torque limits given in the manual to avoid future problems.

Does Slip-On Installation Require Remap on Your Harley?

The answer to this question is straightforward – No! You need not do anything else while making an installation on your motorcycle.

The purpose of the remap is to replace or alter factory software to enhance engine performance. It gives you a better throttle response, more power output, smoother acceleration, and a cleaner running engine.

Baffle Removal from Stock Pipe – Better Sound or Not?

Many people are under the impression that you should never remove a baffle, and others say it does not affect the sound. Neither of these statements is true. There is a big difference between a bike with and without a baffle. It does change the sound, although not always necessarily for better or worse.

Does removing baffles hurt your Harley? No! Baffles don’t do anything but act as a sound barrier. It doesn’t affect the performance of the bike in any negative manner.

Each bike has different specifications and requirements. So the best thing is that you should know all about your bike before installing exhaust pipes on it.

If you are not happy with the loudness of the exhaust system, then you can try to lower its sound by using a noise suppressor or mufflers.

We use cookies on our website to give you the most relevant experience by remembering your preferences and repeat visits. By clicking “Accept All”, you consent to the use of ALL the cookies. However, you may visit "Cookie Settings" to provide a controlled consent.
Cookie SettingsAccept All
Manage consent

This website uses cookies to improve your experience while you navigate through the website. Out of these, the cookies that are categorized as necessary are stored on your browser as they are essential for the working of basic functionalities of the website. We also use third-party cookies that help us analyze and understand how you use this website. These cookies will be stored in your browser only with your consent. You also have the option to opt-out of these cookies. But opting out of some of these cookies may affect your browsing experience.
Necessary Always Enabled
Necessary cookies are absolutely essential for the website to function properly. These cookies ensure basic functionalities and security features of the website, anonymously.
Functional
Functional cookies help to perform certain functionalities like sharing the content of the website on social media platforms, collect feedbacks, and other third-party features.
Performance
Performance cookies are used to understand and analyze the key performance indexes of the website which helps in delivering a better user experience for the visitors.
Analytics
Analytical cookies are used to understand how visitors interact with the website. These cookies help provide information on metrics the number of visitors, bounce rate, traffic source, etc.
Advertisement
Advertisement cookies are used to provide visitors with relevant ads and marketing campaigns. These cookies track visitors across websites and collect information to provide customized ads.
Others
Other uncategorized cookies are those that are being analyzed and have not been classified into a category as yet.
SAVE & ACCEPT